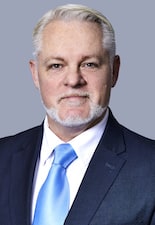 Randall Wright is a paralegal with the Law Office of Leon Aussprung MD, LLC. He has been a paralegal for over a decade and has always been interested in the law as a career, due largely to the influence of his older brother, who is an attorney in Arizona. Randall has been with Aussprung Law since February of 2021 and has quickly become involved in every medical malpractice case the firm handles. He is the office’s primary medical malpractice Paralegal and works directly for Dr. Aussprung, James Hockenberry, and Yulier Gonzalez on all the medical malpractice cases . Randall enjoys being a primary resource for the firm’s attorneys, as well as working directly with clients. Medical malpractice is an area of the law that he feels is critically important. As is so often the case, we trust doctors to be the experts about our health, but as with all professionals, mistakes are sometimes made. Unfortunately, the stakes are high with medical care and the resulting injuries are often catastrophic. The law offers people a legal remedy to compensate them for the injuries they have suffered due to negligence, especially when their injuries are disabling, permanent, or include the end of their ability to work and provide for themselves and their families. This is what appeals to Randall the most about working on Medical Malpractice cases, the way in which we can help clients improve their lives. He also enjoys helping resolve complicated issues for clients. Randall brings a unique blend of experience that runs the gamut of law fields and has come to specialize in taking on catastrophic injury cases. Randall has experience working on multi-million-dollar lawsuits and one of his favorite case outcomes, was a 1.5 million dollar settlement he worked as the primary paralegal for a young man that fell from a defective ladder.

Randall began his legal career working for a law firm that primarily practiced bankruptcy law. After four (4) years of helping clients navigate their way through their financial setbacks and helping them reestablish their lives, Randall moved into Plaintiff’s Personal Injury. Randall has worked in Plaintiff’s Personal Injury for over eight (8) years and has been chosen as the Senior Paralegal at two (2) different law firms with whom he worked.

Randall is a native of Colorado, moving here with his family six (6) years ago and now making his home in West Bradford, Pennsylvania. Growing up, Randall spent time in Idaho, Utah, California, and Colorado. He enjoyed sports in high school and played baseball, basketball, and football.

Before coming to work for Aussprung Law, Randall spent a little over six (6) years as a United States Marine, attaining the rank of Sergeant. He was selected to serve at three (3) U.S. Embassies as a Marine Security Guard, namely: Mexico City, Mexico, Ankara, Turkey, and Sofia, Bulgaria. He also worked as a paralegal in the U.S. Army Reserve for two years after leaving the Marine Corps. Randall was a recipient of two (2) Good Conduct Medals, a National Defense Medal, the South-West Asia Service Medal, and multiple Expert Marksman Awards with both the rifle and the pistol. Randall also received two (2) letters of appreciation and was part of two (2) separate units that were selected for the Detachment of the Year Award. Following his time in the armed forces, Randall used the G.I Bill to help put him through school beginning at Western State University in Gunnison, Colorado and then graduating from Regis University in Denver, Colorado with a Bachelor of Arts in Philosophy.

In between his college years Randall started a family when he met and married his beautiful wife, Robin. His wife was raised in Edgemont, Pennsylvania and is a managing partner in the restaurant industry. Largely because of his wife’s family ties to this area, Randall returned to the Philadelphia area to live. He has a step-son, Jesse, who is now living in Florida studying to be an electrical engineer. Randall has two daughters. His older daughter Paige is attending college at Delaware County Community College, where she started as a point guard for their Women’s Basketball Team. His younger daughter Trista, attends a local elementary school where she loves art, music, and recess.