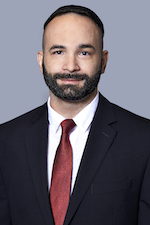 Yulier Gonzalez, Esquire is an Associate Attorney at Aussprung Law. Prior to joining the firm, Mr. Gonzalez was a Law Clerk for the Hon. Judge Thomas A. James in the Columbia County Court of Common Pleas, Pennsylvania, where he developed extensive knowledge, experience, and trial practice in the areas of medical malpractice, general civil litigation, real estate disputes, family law, criminal law, and estate planning.

As a law student at Dickinson, he served as a Research Assistant for copyright and real estate issues involving property regulations. He was also a member and a coach of the Dickinson Moot Court’s immigration team and participated in the Immigration Law Moot Court Competition in New York. While in law school, Mr. Gonzalez was the recipient of a Cali Award for his achievement in the study of Negotiation/ Mediation.

During his third year of law school, Mr. Gonzalez was a certified intern at the Office of the Attorney General - Civil Litigation Section, where he assisted trial attorneys in conducting discovery, preparing cases for trial and depositions, and gained insight about the Commonwealth’s civil litigation process.

During law school, Mr. Gonzalez interned at the Federal Housing Finance Agency (FHFA) providing legal support to the EEO Department in handling cases involving workplace discrimination and cases from other agencies where a conflict of interest had arisen. Mr. Gonzalez supported FHFA’s mission in promoting diversity and inclusion in the workforce in further compliance with federal law.

While in law school, Mr. Gonzalez was also selected as a Judicial Law Extern to the Honorable Martin C. Carlson, U.S. Magistrate Judge for the Middle District of Pennsylvania, with whom he gained valuable experience and skills in federal civil litigation involving immigration and social security cases, including disability.

Prior to law school, Mr. Gonzalez was a bankruptcy paralegal at a large law firm in New Jersey where he assisted in Chapter 7 and 13 bankruptcy filings to protect the interests of major banks and creditors.

Mr. Gonzalez is an avid reader of thrillers, novels, and science fiction. He is passionate about outdoor activities, gym workouts, learning a new language, photography, and healthy eating/cooking. As a native of Cuba, Yulier has an in-depth understanding of the cultural differences between the U.S. and Latin America, including the intersectionality of race, class, and gender in the current judicial system. He strives to help those most vulnerable. He is fluent in both English and Spanish.