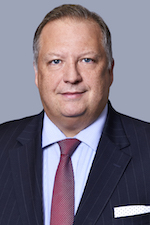 Jim Hockenberry, Esquire is a Partner at Aussprung Law. Jim is a native of Centre County (Bellefonte), Pennsylvania. He graduated from Bellefonte High School in 1995 and earned his B.A. in Economics from Penn State University (University Park) in 1998. Prior to attending law school, Mr. Hockenberry obtained his General Securities Representative Qualification Examination, known as the Series 7 and also his Series 63, the Pennsylvania equivalent. He then worked as a registered investment advisor for a national financial services firm.

He graduated from Temple University Law School in 2003. While in law school Mr. Hockenberry wrote a paper entitled Predatory Lending: A New Solution to Fix an Old Problem (2002) under the advisement of Professor Charles Pouncy. The paper examined the federal and state statutory framework (TILA, RESPA, HOEPA) regulating the mortgage lending industry and discussed the framework’s inadequacy for dealing with the problem of predatory lending. Mr. Hockenberry proposed that the securities’ industry’s “Suitability Doctrine” be applied to mortgage lenders/brokers.

Following law school, he worked in Central Pennsylvania for a legal aid firm providing legal services to those who could not afford legal representation. He was a member of their consumer law team where focused his practice on bankruptcy law and various consumer litigation, including adversary proceedings in bankruptcy courts.

In 2005 Mr. Hockenberry began working with a mid-size prominent Bucks County law firm and since that time he has focused his litigation skills on all facets of personal injury litigation, including medical malpractice, premises liability, motor vehicle accidents and product liability matters. In 2013 he came to work for the Law Office of Leon Aussprung, MD, LLC where he remains.

In addition to personal injury matters, Mr. Hockenberry also has significant experience in handling Civil Rights claims under 42 U.S.C. §1983 and was a member of the United States District Court for the Eastern District of Pennsylvania’s Prisoner Civil Rights Panel where he was appointed by the courts to represent plaintiffs in civil rights matters.

Mr. Hockenberry has lectured on the topic of Insurance, Liens and Subrogation for the National Business Institute’s (NBI) CLE on personal injury practice. He has argued before the Pennsylvania Superior Court on multiple occasions and he has argued before the United States Court of Appeals for the Third Circuit.

Mr. Hockenberry now concentrates his practice in medical malpractice and other personal injury civil litigation, including premises liability and motor vehicle accidents (cars and trucks), as well as civil rights claims. He has been lead trial counsel in numerous jury trials across the Commonwealth of Pennsylvania, from Washington County to Philadelphia. He has served as an arbitrator in the Court of Common Pleas Compulsory Arbitration Program in Bucks County.

He is married to Kristin Hockenberry (nee Wallace), and they have four children, Mackenzie, James, Nicholas and Chloe. Mr. Hockenberry is an active member of St. Anne’s Episcopal Church in Abington, Pennsylvania, where he is a member of the Property Committee. He is a member of the Concordia Lodge #67 of the F&AM in Jenkintown and is also a member of the American Association of Justice. In his free time, he enjoys reading, camping in the great outdoors with his family, cooking, and dabbling in the German language. He and his family reside in Montgomery County, Pennsylvania.