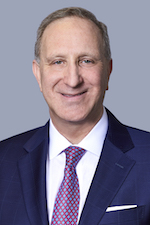 Leon Aussprung M.D., J.D., LL.M. is an experienced trial attorney, who was a board-certified physician for 14 years. He practices law in the areas of medical malpractice and catastrophic personal injury and wrongful death cases, including car/truck accidents, premises liability, workplace injuries and product liability, as well as representing qui tam Relators (whistleblowers) in health care fraud and abuse cases.

Dr. Aussprung obtained his bachelors degree (B.A.) from the University of Virginia, a medical degree (M.D.) from Jefferson Medical College in 1991 and then completed a residency program in pediatrics at the duPont Hospital for Children, the Medical Center of Delaware and Thomas Jefferson University Hospital. He was board-certified in pediatrics for 14 years and has worked as physician at Thomas Jefferson University Hospital and duPont Hospital for Children. Dr. Aussprung earned his law degree (J.D.) from the University of Pennsylvania Law School in 1997 and then further continued his legal education by obtaining the advanced legal degree of an LL.M. in Trial Advocacy, with Honors, from the Temple University Beasley School of Law in 2006.

Dr. Aussprung was selected every year from 2007 through 2020 by Super Lawyers magazine as amongst the top attorneys in the Commonwealth, which placed Dr. Aussprung in the top 5 percent of Pennsylvania's 39,000 attorneys. This selection as a Super Lawyer was based upon balloting from attorneys and review by a blue-ribbon panel.

Dr. Aussprung has been involved in numerous multi-million dollar settlements and verdicts. Notably, in the 2006 Hook case, Dr. Aussprung won a $2.7 million verdict in Scranton (Lackawanna County, Pennsylvania) for the family of a woman who died from a bowel perforation and delay in diagnosing and treating an abdominal infection (sepsis) following elective surgery. This was the largest verdict ever in a death case in Lackawanna County.

Dr. Aussprung was also involved in the Matteo case, which involved the death of Suzanne Wester Matteo, a OB/GYN physician, who died from internal bleeding following her infertility treatment (IVF harvesting). The trial of the case in Philadelphia resulted in a $25 million verdict for her husband.

For example, in Pittsburgh, Dr. Aussprung obtained a large settlement for a brain injured premature infant. The claims in this case involved a pregnant woman with a known placental tear, who was not properly monitored during labor and then had forceps improperly applied to the baby resulting in the infant suffering a skull fracture. In Philadelphia, Dr. Aussprung obtained a large settlement for a brain injured 68 year old woman, who received inadequate antibiotic treatment following brain aneurysm surgery. She developed a brain infection, which progressed and left her severely disabled. Also in Philadelphia, Dr. Aussprung litigated and obtained a settlement in the case of a five year old child with leukemia who was over-transfused with blood during a surgical procedure and died. Another settlement involved a teenager with diabetes, who was severely brain damaged at three years of age when timely diagnosis and treatment failed to occur.

In more rural and conservative counties, Dr. Aussprung is equally as successful as he has been in Philadelphia. In an Indiana County case, a large settlement was obtained for the family of an infant who died from a delay in diagnosis of meningitis. In Clearfield County, Dr. Aussprung was involved in the settlement of a case involving a child whose seizures were not properly treated and had improper I.V. fluid management. In Chester County, a settlement was obtained when a woman's deep vein thromboses (DVTs) were not properly treated. In York County, large settlements were obtained for twin children who suffered injuries at birth and necrotizing enterocolitis (NEC).

Many other settlements have been obtained in Pennsylvania and New Jersey, as well as other jurisdictions. Some examples include settlements for wrongful death from the failure to timely treat myocardial infarction (heart attack) and cases involving improper anesthesia care. In cases involving catastrophically injured infants and adults, Dr. Aussprung has settled cases of seizures that were not properly treated and numerous obstetrical and neonatal cases involving the birth of infants who were brain injured from improper management during labor. He has also settled infant birth brachial plexus injuries, as well as cases involving adults with other nerve injuries, such as cauda equina syndrome.

Dr. Aussprung's personal interests include complex pediatric health law issues and he has lectured and published in the area of health care fraud and abuse litigation. He has also taught graduate level courses on Health Care Law. Dr. Aussprung is also a private pilot.

Dr. Aussprung is admitted to practice law by the Supreme Court of Pennsylvania, the Supreme Court of New Jersey, the United States District Court for the Eastern District of Pennsylvania, and the United States Court of Appeals, Third Circuit. He is a Fellow and member of the Board of Governors of the College of Legal Medicine, which is a distinguished group of physician attorneys. He is also a member of the American Association for Justice, the Pennsylvania Trial Lawyers Association and the Philadelphia Trial Lawyers Association.