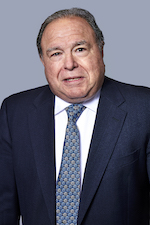 Robert has practiced law since 1973. He graduated from Ohio Northern University Petit College of Law with distinction ranking first in his class. He initially practiced in Ohio. He gained experience in personal injury, business representation, litigation, and criminal and civil rights. He successfully argued Williams v. Williams before the Ohio Supreme Court. It was a case of first impression in which Full Faith and Credit under the U.S. Constitution was extended to a foreign state custody decree. In State v. McPheron, another notable case, Robert defended an accomplice in a felony murder. It was the first death penalty case under the 1974 reinstatement of the death penalty in Ohio. The client was convicted of a lesser included offense and spared the death penalty. Robert also represented a national movie production company with regard to a threatened obscenity prosecution in connection with the theatrical release of the controversial film, Last Tango in Paris. After demonstrating the film did not violate the community standards of Miller v. California, prosecution was declined.

In 1976, Robert relocated to his hometown of Philadelphia. He was associated with a mid-size general practice firm. He continued to concentrate his practice in the areas of personal injury and business representation. Further, he litigated numerous federal court injunction cases on behalf of the Pennsylvania – New Jersey Service Station Dealers Association under the newly enacted Petroleum Marketing Practices Act 15 USC. Ch 55 which defined the relationships between oil companies and the independent service stations through which they distribute their products. These cases established several precedents to protect the rights of the dealers. He also successfully defended the Dealers Association in a class action anti-trust action brought in federal court in Delaware in which the court declined to certify the class for liability. This ruling essentially ended the case. He also successfully pursued a claim in the United States District Court for the Eastern District of Pennsylvania on behalf of a U.S. defense contractor brought under the Buy American Act of 1933, 41 USC Chapter 83. It involved military equipment manufactured in South Korea. After several years of litigation a substantial settlement resulted for his client.

In 1983, Robert opened his own law office with locations in Philadelphia, PA and Cherry Hill, NJ. He continued to concentrate his practice in the areas of personal injury and business representation. He has had several cases which resolved in excess of a million dollars: notably wrongful death of a 26-year-old man in an auto-truck collision resulting in a $2.5 million settlement; a motor vehicle accident resulting in numerous lumbar spinal fusions $1.5 million; a motor vehicle accident resulting in traumatic brain injury which settled for $1.3 million; a California matter in coordination with San Francisco counsel $2.7 brain injury settlement. He represented a teenager who was sexually assaulted by her supervisor at a national fast food establishment. Robert filed a complaint with the Equal Employment Opportunity Commission. It agreed to join in the civil suit against the employer. It addition to a substantial settlement, the employer agreed to revise its national employee training procedure to prevent similar occurrences in the future.

Robert has had many mid and high six figure recoveries, including a $425,000 settlement for a cervical fracture resulting from a 60 vehicle pile up, and $900,000 from an employment related shooting death. He has litigated cases in Ohio, Delaware, New Jersey and Pennsylvania in both Federal and State Courts.

Robert serves as a Judge Pro Tem in the Philadelphia Court of Common Pleas in which he assists the Court in mediating major cases. Previously he was a settlement master performing similar function. In addition he also sits as an arbitrator in the Philadelphia Court of Common Pleas Compulsory Arbitration Program. He has also been privately engaged as both an arbitrator and mediator through alternative dispute resolution. He is a member of the Pennsylvania Bar Association, the Pennsylvania Association for Justice, the Philadelphia Trial Lawyer Association, the New Jersey Association for Justice, the Brandeis Legal Society.

He lives in Center City with his wife, Denise. He has three daughters, two sons-in-law, and four grandchildren. He spends his leisure time primarily with his family. He also enjoys reading, traveling, opera, theater, sporting events (especially baseball).