If you or a family member have suffered medical complications or injuries from Vaping (using e-cigarettes, such as Juul), such as lung damage, nicotine addiction, respiratory distress, or other physical injuries … 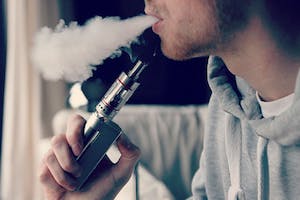 Vaping, or smoking e-cigarettes, is a rising trend especially popular among adolescents and young adults today. In fact, e-cigarettes have surpassed all other forms of tobacco to become the most commonly used tobacco product by youth in the United States.1 However, recent studies have identified serious and potentially life-threatening impacts of these products on users. Irreversible lung damage, nicotine addiction and physical injuries from malfunctioning devices are just a few of the examples of the negative consequences associated with the use of Juul and other e-cigarette products.

A study conducted by Harvard researchers has determined that more than 75% of flavored e-cigarettes tested contained a flavoring chemical linked to bronchiolitis obliterans, more commonly known as popcorn lung.2 Popcorn lung is a scarring of the bronchioles, the smallest air passages of the lungs, causing them to become narrower and ultimately making it more difficult to breathe.3 The name “popcorn lung” comes from the chemical diacetyl, once used to flavor buttered popcorn, which was inhaled by workers in popcorn factories and caused serious lung disease. Despite the known link between that chemical and popcorn lung, diacetyl is still used to flavor many different varieties of e-cigarettes on the market.4

Further concerns are raised by the apparent efforts of e-cigarette companies, including Juul, to target a younger demographic through flavors and advertising campaigns. The Food and Drug Administration is currently conducting an investigation into whether Juul and other e-cigarette companies violated federal law by advertising outside of the FDA’s compliance policy. Many young people who begin using e-cigarettes are not aware of the tobacco content and the risks of tobacco addiction from vaping. There is also evidence that young people who begin vaping can progress to smoking regular cigarettes, thus potentially exposing young users to the well-known health concerns associated with cigarette smoking.5 Additionally, Juul had been marketed as an alternative to assist cigarette smokers attempting to quit. However, the Juul product contains high levels of nicotine in their cartridges, as much as a pack of 20 regular cigarettes. 6

In California, a class action law suit alleges that Juul Labs (formally Pax Labs) used false and deceptive advertising regarding the safety of the product and that the e-cigarettes were intentionally marketed to attract younger users. The suit alleges that Juul used increased levels of nicotine in the Juul pods, according to various studies as well as Juul’s own patent filings, despite being touted as a safer alternative to traditional tobacco smoking.7 A suit in New York alleges that Juul did not properly warn users regarding nicotine and the potential for addiction to the product, as well as using targeting advertising aimed at young users such as sweet, “candy-like” flavors and marketing campaigns on Twitter.8 In Florida, yet another class action suit seeks to hold Juul responsible for deceptively marketing its product to young users without proper warnings regarding tobacco use.9

E-cigarette companies have also faced lawsuits arising from injuries to users after product malfunctions. Explosions of e-cigarette batteries have been reported to cause horrific burns, fractured bones and eye injuries, sometimes resulting in blindness. At least one death has been attributed to a malfunctioning e-cigarette device. A recent analysis of data from the U.S. Consumer Product Safety Commission states that 2,035 people were treated at hospitals for injuries sustained from an exploding e-cigarette device between 2015 and 2017. 10

Despite the health risks and injuries associated with e-cigarettes and vaping, companies like Juul continue to increase revenues and garner new customers. This could lead to more people becoming injured as a result of vaping or e-cigarette devices. If you have been injured as a result of vaping, please call the Law Office of Leon Aussprung and speak with our lawyers today.

If you or a family member have been the victim of Juul or other e-cigarettes, please email LA@AussprungLaw.com or call 855.770.0902 for a full, no cost, evaluation of your case.

1 Surgeon General’s Advisory on E-cigarette Use Among Youth

6 Surgeon General’s Advisory on E-cigarette Use Among Youth